I wanted to make a quick OOC thread. I'm also posting the map here for you all to see. There are a few different maps of Zendikar, and they are all very different. Akoum is the largest continent to the north west, the map is of the continent and the floor of Zendikar, the Roil due to it's ever shifting area and expanse. It clings to the world above the forests, and mountains. This is the prettiest map i could find, but there are a few small corrections i have to make.

The teeth of Akoum are supposed to be part of the wastes, and the town of affa is much too close to the actual twisted mountains and harsh bone white ashen grounds there. The map also lacks fort Keef, which is our starting point, by my recollection it should be in that large forest patch just above Gruul draz, the town is nestled at the foot of a ravine, close to a running river as it's water source, the closest town to the glass pool. At least this was my reading of the books and locations.

The campaign is going to be heavily exploration based. I never mentioned this previously, but Akoum is ritch in ruins, a lot of older civilizations sprouted and died on this continent over time. A tremor and earthquake two months ago caused a tectonic shift in both the earth and the roil, and new ruins have been unearthed further to the north. This has set forth a small gold rush, as scavengers are prepping at fort keef to basically raid these older hidden lands. 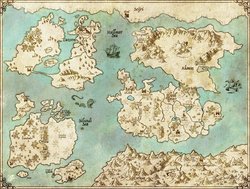 Fort Keff is a trading fort. Military owned, with high walls it's safe from most predator attacks, but the forest outside is wild and untamed, the town is about 3,000 strong, and holds the usual taverns, black smiths, and tradesmen, all run under a loose militia and guard. The temple here practices the main faith of Zendikar teaching of Ulma, Emrie and Cosi. Often times the temple offers shelter, and has story tellers willing to preach the old passed down stories.

Writting on zendikar is a rare skill for most people, formal education all the rarer, but Fort Keff is one of the few places where more educated people can be found, it's primarily a human settlement.

If you have any additional questions I am more than happy to try and answer them, and I hope to put out the first post for the actual game tomorrow when I wake up.

Alright. Excited to get started. One question though: do our characters know how to read and write?

Am I missing something or is Fort Keff missing from the map?
Z

freeko said:
Am I missing something or is Fort Keff missing from the map?
Click to expand...

east said:
The map also lacks fort Keef, which is our starting point, by my recollection it should be in that large forest patch just above Gruul draz, the town is nestled at the foot of a ravine, close to a running river as it's water source, the closest town to the glass pool.
Click to expand...

Fort Keef, was built at the bottom of a valley, water pours down from the mountains and roil above. Here there is enough space to sustain a population of 800 or so men and women. Fort Keef is one of the larger settlements on Akoum thanks to the rich mountain walls which provide safety around the...

@ZRS Yeah, most of the backgrounds of adventurers means they have some form of formal education that puts them above the common person.
OP

it's been almost a week, and i want to start the next round, but I was originally waiting for everyone else to post, have people lost interest or did we just loose 3 players?

I am having trouble finding my "in" as it were. My character would be at the temple, and I cant quite find the way to get her into the scene
Z