"A ninja movie night. Yes. Indeed. As we are big fans of those."

Hitomi nodded along with Kye's words, nudging her glasses back up onto her nose and generally doing a terrible job of pretending that the catgirl hadn't said anything unusual at all. The white-haired kitsune was still a little flustered from second-hand embarrassment, her cheeks still a little pink, but catching sight of Orpheus - and particularly hearing the wolf-girl mention his name - had gone a long way towards helping her focus. While she was adjusting her glasses, Hitomi was also surreptitiously examining the new girl out of the corner of her eye, casting a sharp, curious gaze over Orpheus' latest student.
N

Yumena raised an eyebrow at the girl that had just grabed her arm but didnt say anyhting about her strange mannerisms. she gave a polite smile. "yeah a movine night does sound fun. have you guys been having... umm... movie nights together often?" she asked trying to figure out how long this group had been together.

The wolf girls tail was starting to wag a little at all the attention. a little bit of happiness and a bit of nervousness.

"Movie nights, almost everyday, though ninja movies are a bit more rare." Kye was getting into this, and enjoying the spy game a lot. "We seem to be competing for screen time with the botany club. They have lots of harvest meetings, but never seem to clean the rec room afterwards." She smiled with a fun contemplative expression as she processed how to disguise their discussion. Composing a message using storylines and such, she continued, "Last night, it was A Stranger Among Us, followed by Oh Brother Where Art Though, then Swamp Thing, finally the Cleanup of the Exxon Valdez. Oy, that was a fun night, but in all truth a long one." She thought about finishing the story but didn't have enough X rated plotlines to draw titles from. Though she did burn with a flash of blush as she remembered this morning. Her eyes fell on the wolf-girl beside her with a new appraisal, undressing her with her eyes and liking what she saw.

"The... botany club... is a problem," Hitomi agreed. "We're still working on a solution for that." She smirked a little at Kye's code, appreciating her friend's quick wit - though she was a little dubious about the new girl's chances of putting it all together without having been there herself. Still, the bit about harvest meetings was pretty clear, if Orpheus had already introduced her to their enemies. Hitomi watched the wolf girl carefully for her reaction to that... up until she noticed Kye's blush. That brought a rapid, powerful blush to Hitomi's own cheeks, as she mentally filled in the story missing from Kye's list.

"A-a-at any rate," the kitsune stammered, suddenly flustered again and looking to change the topic. "Sensei only introduced me to the group a few nights ago." And we've gotten very close in that time, her mind added, deepening her blush. "Um, Kobiashi-san and Suzuyume-san have been watching movies together longer." Was she referring to their activities as magical girls, or their other activities together? She wasn't sure herself now. She kept talking. "Isabella-chan, too; she's not here right now, we'll have to introduce you later..."

For that matter, she'd also forgotten to introduce herself. "Oh, I'm Hitomi Jin, a third year," she added suddenly, ducking into a bow. Her reddened face vanished behind a cascade of loose, white hair.
OP

Location
In the Moonwood, chasing unicorns. 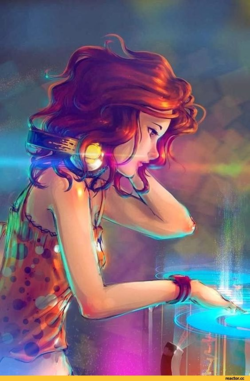 "And I'm Ryoko," the rose haired tenshi added with a bow, "Nineteen years old. I'm a second year here. It's a pleasure to meet you. Do you think we can get together for lunch? I know a nice spot on the roof."

Maybe she was a halfu--or it was just the way neo-human genetics worked out--but Ryoko's skin was slightly more golden and less freckled than a typical ginger. She had full pink lips emphesised by a littlle gloss, saphire eyes wiht just the right amount of eye liner. Angelic wings were dove gray.
N

"botonny club..." Yumena mind twisted for a moment and then she remembered the plant monsters she had fought herself jsut a night before, they must mean them. she wasn't sure she could keep with this double talk forever!

"ah yes... the botonny club i think i ment a few members last night... we arelly should find some time to talk about them. maybe at this rooftop lunch meeting?" she asked looking over at the Tenshi that had introduced herself.

Kye giggled at the silliness of the double-talk, but let her mind race away in cloak and dagger supposition for a bit. Her thoughts a million miles away, buried in heavy trench coats and dark sunglasses and clandestine meetings under streetlights or in dark alleys. Then someone mentioned lunch and she remembered with their activities this morning, they hadn't exactly had time for a good breakfast. Her stomach growled, "Lunch sounds great, though, I needs something to push me through the day. Hey, come by the vends, I got breakfast this morning." She brandished her card as a sword, approached the hot food vender, ramen or tartar meat burgers for all. She stirred up the chāshū and toppings in her ramen and ate as she walked.

The turn towards discussing lunch plans worked out well for Hitomi; it gave the kitsune a chance to stop talking and compose herself again. This was going to be a problem. If she couldn't look at Kye or Ryoko without her thoughts turning back to that morning, to their skin glistening under the spray of water from the Donovan's shower, fingers and lips running down her...

She mentally shook herself again. Focus. The new girl was talking about the 'botany club' again. Hitomi latched onto that, making it an anchor to centre her thoughts around. So she'd encountered their foes already? The kitsune adjusted her glasses again, her blush fading as she gave the wolf girl another appraising glance. Had she fought them on her own? And won? That was impressive. "That sounds like a good plan," Hitomi added her agreement to the rooftop lunch suggestion. She could find out more about it then, when Minako wasn't so close by.

When Kye led the group over to the food vendors, Hitomi waved off her offer apologetically. "Nothing for me, thank you," she said. "I was planning to fit in some archery practice with the club before my classes." She'd technically spent the night practicing, from a certain point of view, but the kitsune didn't really count that. "I'll catch up with you at lunch time."

She turned to offer a farewell bow to Minako and the wolf girl before departing, but paused mid-motion as she realised that she still didn't know the new magical girl's name. "It was nice meeting you, Minako-kohai and, um... sorry, I think I missed your name?"
You must log in or register to reply here.
Share:
Facebook Twitter Reddit Pinterest Tumblr WhatsApp Email Share Link
Top Bottom