Fx Female A Delightful Jumble of Ideas~ (Fandoms and Pictures! Craving League of Legends~ Zoe anyone?))

Hello one and all! Thank you for taking the time to come check out my humble request thread. Hopefully you didn't come here expecting beautiful layouts and formatting with spatters of art here and there, as unfortunately that's all outside my area of expertise. What is in my area of expertise however is writing! Or roleplaying, to be specific. I'm by no means the best writer in the world, but I think I get by reasonably well. I've roleplaying for a number of years now on and off different sites with different partners, some long-term, some short-term, all fun, so I figured it was about time I started throwing out some of my own ideas rather than just responding to other people's in the hopes they'd have similar interests as me. I usually prefer my roleplays to be multi-paragraph. 2 - 4 is usually my preference, but I don't mind a single paragraph so long as it covers everything that needs to be said, such as during dialogue, for example. I'm also a huge fan of rapid, back and forth replies too. I'm not really much of a fan of waiting days or even weeks to get a reply back, I usually prefer at least one every day or two, but if you can manage more then I'll love you forever!

Anyway, with that brief messy introduction out of the way, onto what everyone came here for in the first place - the ideas! Like I mention in the title most of these will probably be fandom based. I usually prefer Canon x Canon when it comes to these, but I'm not opposed to Canon x OC or OC x OC so long as the plot is interesting enough. I'm also happy to double up for a lot of these too! My plot-to-smut ratio varies wildly with ideas. While I do enjoy sprawling epics with tons of character development in them and a slow burn romance, I'm also just as happy for a quick, smutty one shot where we throw two characters at one another to fuck each others' brains out, excuse my French. I should also add that for many of these I'd also be happy to consider playing as a futa character, though I'd prefer my partners to play females.

Now I'll just awkwardly leave my f-list here since I couldn't find anywhere else to fit it, woops~

Note: Most images are probably gonna be NSFW, but hey, what do you expect on a site like this?


My Hero Academia
Oh my god I'm in love with this show right now! The characters are fantastic, whether its their personality or their designs or their Quirks, or a combination of all of those things, every single one of the characters in the show (bar one) is lovable in their own way, especially the girls! When it comes to this fandom, I'd honestly be happy trying out just about any FxF pairing we can think of, though Momo x Jirou is the OTP <3
Contrary to my statement about canons and OCs up above, I would adore the chance to play as a female OC against one of the characters too. I've really been craving some cute, bubbly Uraraka lovin' lately, but I'd be down to get dirty with any of the girls. Obviously when it comes to this fandom there's so much we could do plot-wise too, even going so far as to follow our characters all the way from UA to becoming pros, developing their relationships along the way until they start a family of their own. There's so much potential for action too with villain attacks, training exercises, you name it! I'm very open when it comes to this fandom, so just hit me up with any ideas you've got! Overwatch
I've had a real craving for some Overwatch themed RPs lately, specifically ones involving a certain adorably sexy bunny girl. Once again I would adore the chance to play an OC opposite her, maybe a new mechanic assigned to her Meka, or some huge fan of hers from her pro-gaming days before she started piloting mechs, or even just a highschool crush. I just want to do something appropriately sweet for this little cutie. I'm also willing to consider pairing her up with other canon characters though, so throw your ideas at me!
Other than D.Va, I'd also love to try out something involving this this goddess. This one's a little more difficult to come up with an idea for, but I'm happy to try and brainstorm something out with anybody who's interested! Maybe something rougher or more action packed, involving corporate espionage and sneaking into company buildings only to get caught and taken advantage of, who knows? Something sweet and romantic always melts my heart too.
I'm also up for trying out something involving any of the other ladies too, these two are just my current cravings!

Expanding on the D.Va idea, I'd love to expand on an idea I've had, once more involving D.Va. Specifically I'd love to play as this cutie, a fellow Meka pilot and engineer who works to repair the mechs both in and out of combat. Maybe they were friends even before joining the military, or maybe they met when they were assigned to the same Meka squad. Maybe they even bunk together in the barracks, whether it's in the military or in Overwatch itself. Regardless of how they meet, the two quickly become great friends and from there their relationship only grows into something more romantic and sexual in nature, eventually leading hot, passionate lovemaking after intense combat operations when adrenaline is running high, or quick little trysts around the barracks or even in one of their mechs whenever they can find the time for one another. Obviously a lot more can be added to this, and there can be plenty of action and drama thrown in too, I just love this character's design and I'd love to pair her with D.Va.


League of Legends
This one's probably a little weird when it comes to RPs since the game's lore is a bit of a mess and there's not a huge amount of reliable information to work with when it comes to the world... but the characters are fantastic, and who needs world building when we can just come up with an excuse for pretty characters to go at it like rabbits? Right now my favorite characters to do something with would be Ahri or Xayah, or even better - both of them! They're both really fun characters, and I think they'd have a lot of fun interactions if we were to force them together somehow. Maybe instead of falling for Rakan, Xayah fell for Ahri instead and the pair developed a romantic relationship while wandering the wilds of Ionia together? Maybe they're classmates or roommates in an Academy skin line AU? Maybe they're both badass magical girls in the Star Guardian skin line AU? Who knows! There's so many weird and wonderful ideas we could do with one or both of the characters, so shoot me a PM and lets discuss something!
While this was just a little biased towards Xayah and Ahri, I'm also willing to consider some of the other girls too, so if you're craving something LoL-related but you don't like furry ears and tails and weird bird feet, just let me know and we'll work something out! Zoe is a secret guilty pleasure of mine, so include her and you'll have me swooning all over you~. Even more so if it involves her adorable new Pool Party Skin!

**New Update~**
Also maybe Kinda craving a Neeko right now too? She's fun, and quirky, and adorable, and while I'd love someone else to play as her I'd be happy to give her a go myself for the right partner and pairing! So hit me up with ideas and lets work something out~. 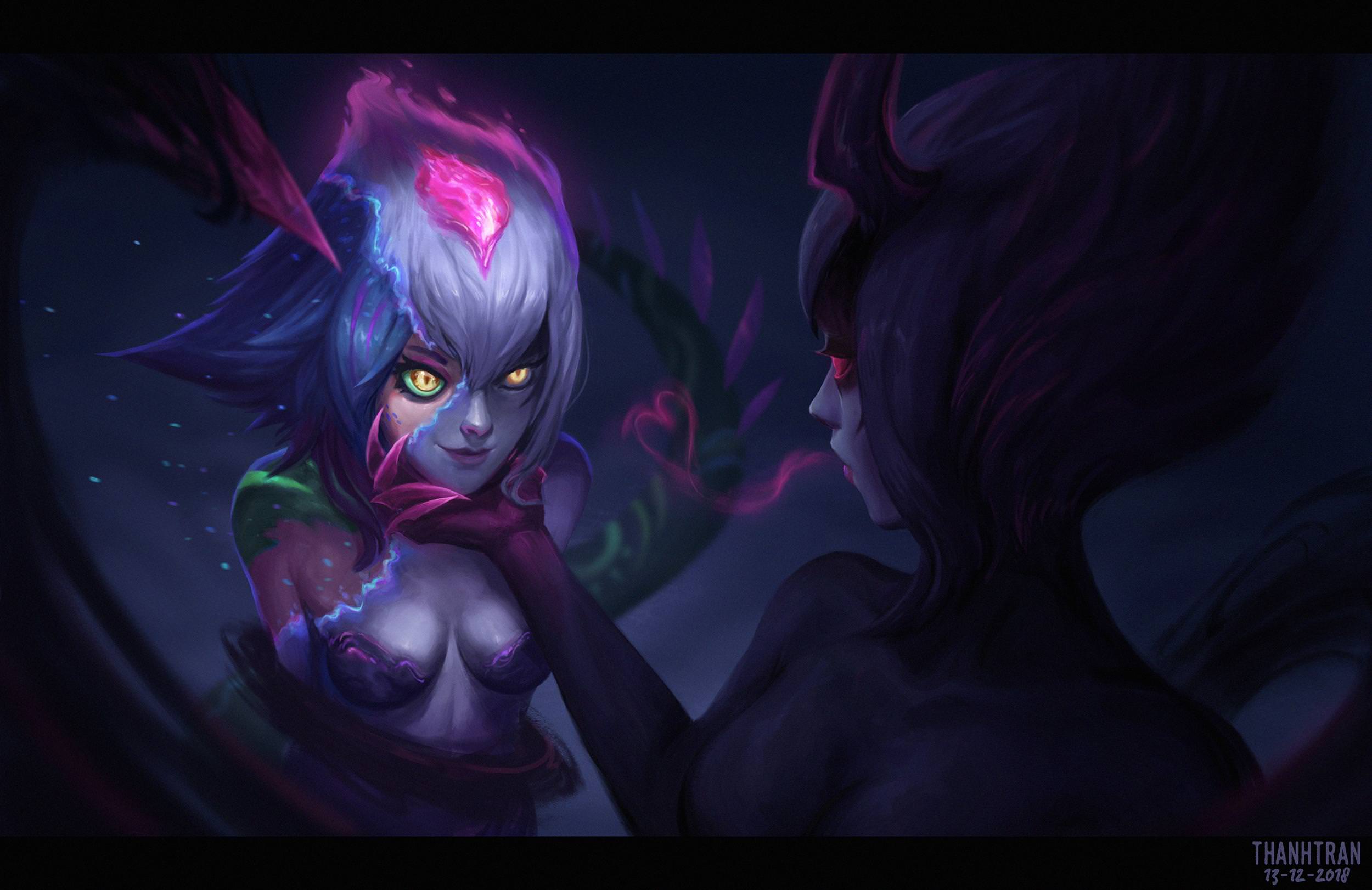 RWBY
So I've never really been hugely into RPing in this fandom, but lately I've really had a craving try out something. Specifically something involving everyone's favorite Schnee. Even more specifically, something based on this piece of artwork I just saw. There's just something so deliciously fiendish about Neo having a poor, defeated Weiss completely at her mercy. Bonus points for the fact that the only thing better than one Weiss is double the amount~. Completely unrelated, but I'd also be totally down for anything involving Weiss in a swimsuit or a beach setting. <3
For the most part I'd like to stick to canon characters for this, but I'm open to discussion so long as there's some Weiss involved somewhere!


And I'm afraid that's all for now folks, but watch this space! I'll be updating with more ideas when they come to me, and who knows, maybe they'll not all be fandom ideas someday. For now though, thank you to anybody who made it this far, and I look forward to hearing for anybody who's interested in trying something out! :3
Last edited: Apr 28, 2019
OP

Another tentative bump~
Still on the lookout for a D.Va <3
OP

That time of the night again~
Have a bump
OP

Boop~
I'd kill for a Zoe at this point, there's something so fun and bubbly about her that makes her seem like she'd be delightful to play with! Maybe we could even discuss doubling up? Who knows~
OP

Bump~
Added RWBY and a couple of ideas to go with it, maybe someone'll be interested in playing as Weiss for me? :3
OP

Lets give this another bump~
OP

Come on, I'm sure there's somebody out there who wants to play this cutie for me, right?~ :3
OP