Valley Park High School
Valley Park High School is located in the Reseda area of Los Angeles, California. The high school itself has a modern design and is only 20 years old. The staff of Valley Park High is committed to providing a safe and healthy learning environment for all students attending. The school offers many different choices for extracurricular activities. Sports include; Wrestling, Lacrosse, Volleyball and Football. Clubs include; Chess, Math, Science, Debate and Band.

The Rp is set inside the Karate Kid universe, but that doesn't mean all players have to take Karate or that there will be fighting all the time. The Dojos will be available However Daniel LaRusso, Johnny Lawrence and Terry Kreese are NPC's This rp is more about The Valley Park students rather than the Karate Kid Universe. However it is encouraged that players who are fans of the universe Karate kick into the immersion of the universe.

Valley Park High accepts students from all over the local Los Angeles area, As a public school the staff feel obligated to give everyone a fair and equal education. At Valley Park High the staff work hard to make the students as prepared as possible to venture out into the world after graduation pursuing their dreams and goals


Name:
Age:
Nationality: (Optional)
Grade/Occupation:
Family: (Do they live with family, alone, complicated what sort of relationship do they have?)

Description: Provide a short description, picture, or both.

Bio: Tell us a little bit about your character
OP

Alright here is my character

Description: Standing 5'6" and weighing 120 pounds. Josephina is an athlete. She mostly plays volleyball but also likes competing in Karate tournaments. She takes her physical condition seriously.

Bio: Josephina grew up in Reseda, hearing stories about Johnny Lawrence and Daniel Larusso. When she turned 4 her younger brother was born. As she got older and more interested in Karate she was sent to a Dojo in the Reseda area at the age of 5. 5 years later when she attained her first belt the yellow belt her dojo shut down. She jumped from a couple dojos for a few years when she turned 14. She started taking classes from Daniel Larusso at Miyagi-do Dojo. A year later she competed in her first tournament. She did not win but she did come home with a second place trophy. She recently obtained her license. She still trains and helps instruct at Miyagi-do Dojo. She looks forward to this year's tournament. 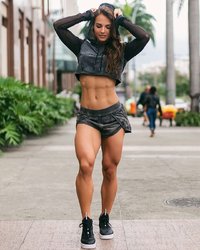 Family: The long-time tension between mother and father has resulted in a house constantly hurling insults at each other. The fact that Richie refrains from participating doesn't stop his younger sister (15) from incessantly belittling him, which his father, a drunk and a bully, finds endlessly amusing.

Description: 6'0",155. Athletic but lacks the killer instinct. It's his father who has forced him into the karate training, to toughen him up. Instead of enrolling him at the Miyagi-Do Dojo, where he likely would have been supported and learned something, he's been placed in the Cobra Kai school, where the philosophy of being merciless translates into the students being merciless with Richie.

Bio: Shy, easy to get along with, naïve and too nice. A good, hard-working student, he basically tries to fit in and fade into the background.
Last edited: Sunday at 6:49 PM
You must log in or register to reply here.
Share:
Twitter Reddit Pinterest Tumblr Email Link
Top Bottom