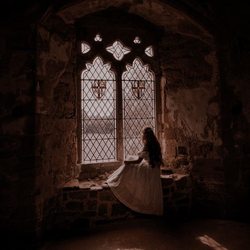 ​
The setting sun cast an orange glow across Hogwarts, a few soft beams of light breaking through the dusty window to fall across Charles’ work. The young Ravenclaw glanced up as he felt the warmth against his face. Far below, the sunlight glittered across the surface of the lake and danced amongst the dark shadows of the forest. He loved the view from up here at this time of day — but it wouldn’t last forever, and he’d really rather be finished before the light ran out and he was forced to relocate to the library or common room. With a wry smile, he turned his attention back to his work.

The young wizard was tucked away in a stone alcove in one of the castle’s many towers, not far from the astronomy tower and attached to a winding stairway which nobody ever seemed to use. A flat stone ledge before the window served as seat and table both, and at present was littered with parchment, quill, a reference book, and a spread of worn but intricately decorated cards taken from a nearby deck. The latest of those, resting between two others, depicted eight wooden staves, angled in the open sky — almost like a brace of arrows let loose by unseen archers below. Charles picked the card up to study for a moment, then set it down again and turned to his textbook.

“Eight of staves…” he muttered aloud as he flicked through the pages, glancing rapidly over the text. He vaguely remembered seeing the card in class, but… “Ah. The swiftness of arrows in flight; a journey or unexpected news, the necessity of change, unfolding events set in motion…”

The young man paused for a minute, glancing back to his cards with a frown. To the left of the Eight of Staves was a shining sun, a generally positive, optimistic sign. To the right, a pair of lovers joining hands before a heavenly figure. The whole spread seemed to suggest a pretty straightforward reading, but Charles shook his head.

“Seems unlikely.” And, perhaps more to the point, a plain, bubbly reading like that seemed unlikely to impress Professor Sumner very much. The Ravenclaw sighed and reached across the alcove for his wand, then regretfully erased the last few lines from his parchment.

Scooping up the Sun and the Lovers, Charles shuffled them back into the deck, then quickly dealt out two replacement cards. He crossed his arms as he considered the new cards in silence for a moment, his head tilted to the side. The first depicted a man hanging upside-down by his foot from a crossbeam, at the mercy of a destiny beyond his control. The second was what could only be described as a classical devil, leering back up at the young wizard.

After a moment, Charles sighed in resignation and reached for his quill. “That does seem more likely…”