Yes was thinking something of course like venom, the movie was damn amazing and gave the character a childlike learning personality as they bonded together but still being an epic monster. Was thinking of doing a gm role for a group of unique and different symbiotes everyone finds. I’ll of course make up some oc ones that are unique that people could choose from though would also take suggestions.

It would be an rp of how different people react and use their symbiotes and shows the struggle of having two different creatures especially with one being a parasite learning to live together as one. Though also had an idea of a venom civil war with different types with sub types I’ll be making up within those groups battling for territory.
Last edited: Sep 17, 2021

Wow actually got some interest fast, might wait for one or two more then, guess I’ll maybe work to making the monsters. Thinking of doing 4 mains with 2 subs each.

So looks like 4 people could work for now, though if everyone here is still interested I would like them to pm before I really commit. Gonna be working on the stuff now then.
OP

bumps to see a bit more interest, already got all the ideas but not gonna post yet then

It (and this is hard to type with a straight face) Combines Robotech/Macross, Macguyver and Neon Genesis Evangelion with… the Cthulhu Mythos, where the stars are right, but we made the first outer gods brain dead and put human pilots inside.

The relevant stuff for this is the ‘Eldritch Society’ a group of well to do researchers who are all that survived after the Migo who were controlling the cloned aliens that are actually mostly human and turned on their masters (just accept the ride) wipe Arkham off the map.

They found a ritual called the ‘Ta Ge’ fragments, which summon a benevolent entity and bind it to a willing human with lots of implied thrusting tenacles and screaming, then a perfectly normal person on the lab floor… except at will they can call the thing forth but inverting their flesh.

They a corporation who’s name escapes me, who’s primary staff are all Dohanoids, which are like Tagers ( the nickname for symbionts) except while one is a sanity and flesh stretching merger, the other eats your soul, oh and He Who Shall Not Be Named runs the corps, while the fetish clubs full of people partying like it is the end of the world are a battleground between symbionts, monsters and occult societies.

I never believe a game would publish a ‘N women undergo machine sex until they pass out, or if you select setting B until they die, you get epic tonnes of magic to summon elder gods.

But they did. Image Keyword searches will be CthulhuTech, Tager, Eldritch Society. They might inspire.

That all said because inspiration is good, this sounds really interesting. Or potentially interesting because it seems like a lucky dip. There are some things I couldn’t do. But put me down as a yes, please
OP

How many people we got? Not enough for four. But these are weird alien symbionts! I for one am happy to deal with the psychological trauma of having turned into an egg or being used as as surrogate for an entire offshoot species if more people write, because unless it goes nuts then my young lady will be feeling like this is the best thing that ever happened to her, only for reality to come crashing… in, then, out.. and how do you bottle feed a species… nope… ah well, me mah always did say I was aimed straight for those flaming gates… now, how did it do it in The Thing? Rafters. I need a warehouse and a lot of people I don’t… oh… all those trophy wives who stood by and watched, glad it wasn’t them. Well, ladies. The Lord of Light has blessed me with a vision of his promised land! Rejoice that he has permitted me the pleasure of blessing the offspring with the fruits of you bodies, otherwise, well, it may be better to reign in the hell our fake world gifts us… I know. I’ll take the most pliable and productive after a day and she can bear host to the dark ones and rule over you as queen. The the rest of you… well… humans do grow in cities, it tune out! Here now, wasn’t the Bible full of spurious lie yet again.

okay. Maybe not the lapsed Catholic looking for redemption.

Can I suggest a police / military faction and the secret government research lab that someone has to escape from? That means we don’t want to get those five wanted stars, makes it three factions and adds an extra layer to the ‘just trying to get on’ theme.

Also, because if I can make a messed up Irish Catholic on a whim, wings might be cool? 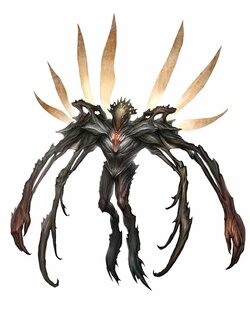 If the lyrics ‘send me an Angel, LORD SEND ME AN ANGEEEEL, RIGHT NOW!’ were not playing, I hope they are now.

They like to make their colonies in high places - rich ones running solo buy penthouses, but the others all live in churches and the tops of the older high rise tenements - as they reproduce like non fatal wasps in the wild they’d build immense fluted nests which sound really like the trumpets of heaven might- confused and trapped on Earth, it’s not just the host who turn to religion, as personalities merge among the faithful and the down and out, the symbiont halves are coming to worldlessly believe they are the Lords Angels of Death… only the Lords cast them down into this hellhole to prepare it for them, but why should they? Between their powers their hosts ability to think-as-Lord, perhaps the people should rise up and cast down their Gods, is nothing else… … and half way across town the interfaith soup kitchen organised by the local Muslim community as outreach and staffed by most local faiths doesn’t have gunmen on the door anymore - food is free to all who are hungry, including symbionts needing biomass… they are a lot of rich to get through. Gods work is really simple. Steal the rich to give to the poor.

Even a mindless fleshs devouring mass can get that!
OP

this is an open world thing but yeah we can have some scenes for that, ill be gming so its your choice of your character finding one of these and going there so yeah that would be fine to add those types of " symbiote food shelters for easy food " and symbiotes can change into anything so just turning your arms into wings if you choose the evolved or from the back if you choose the other one would work. I'll update it with that idea for a military group then, wouldnt mind if anyone wanted to start with them being an experiment for a symbiote and breaking out of a lab kind of thing, would be a really good starter for the other symbiotes to break loose too and find their hosts either as other captured subjects or in the city.

bumps to find more interests, kinda close to being able to get this going :3
M

After watching Maglinant, got inspired for this again.
OP