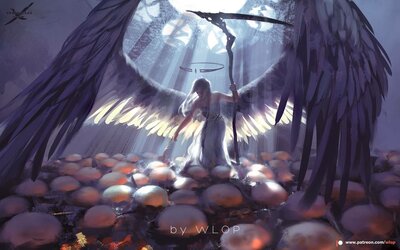 ​
I'm currently looking for stories that are mostly plot and will have none to low smut ratios in them. Also willing to discuss other supernatural themed stories not in the ad, if you had something you believe would catch my interest. Mythology and demonology twists are a favorite of mine.

Drama, violence, and fluff are my weaknesses.

Firstly, partner preferences to see who hits the back button and who keeps reading! I also have another thread for my more in depth, thought out plots you can find here.

I don't care what your gender is as long as you can write a male character well.
Third person, past tense.
Modern day time periods.
Shorter reply time (weekly is preferable, more is a huge bonus.)
I like longer responses. Not novel, just longer. (More than a small paragraph, although I understand sometimes it's not possible.)
No flat out rape or abuse. I'm not here for a bunch of smut so no f-list, and I'm pretty vanilla.
For the love of everything holy, do not flirt with me. I'm here to write and make friends, nothing more.
If you don't have any public threads, please let me peek at your writing. I will, of course, present a longer sample of my own if my public threads aren't satisfactory. This is to assure that we both feel we are compatible with each other.

Now, onto the actual plots I've found scouring the internet! Feel free to suggest others if you think they might strike my interest.


This one comes courtesy of Tumblr but fascinates me. I'd either like to tweak it so my partner plays a male demon who has summoned my character for whatever reason, or a friend / family member of the demoness that does the summoning. Sky's the limit on possibilities.

[1] You suddenly wake up to find yourself in a glowing rune circle. In a distance, jagged black mountains claw into a blood colored sky. A demoness stands before you holding a large tome. She adjusts her glasses. "I knew it! If you can summon us, there had to be a way we can summon you."

A mix of drama and damsel/or whatever the male equivalent is.

[2] You've been a test subject for all of your life. You don't have any idea what life outside of the lab could possibly be like, but you know the life you have now is hell. Today, you find a possibility to escape this hell of a life. Do you take the chance and experience freedom for the first time in your life, or do you think you're not ready for the outside world? Or worse, might the outside world not be ready for you?

[3] You've realized that the genie, if you free her, intends to use her power to rule the world. But you free her anyway because, really, she couldn't possibly be any worse than the people already in charge.

[4] A demon gets assigned to a human to persuade them into doing bad deeds to get them into hell. And it starts getting real frustrating when this human is the embodiment of sunshine and just keeps. Being. Nice.

[5] You join a cult of a chaos god in an act of self destruction. To your surprise the god refuses you as a member, and instead asks if you are okay with having a "roommate" and pulls a suitcase out of nowhere. (Could go either way on which character is which)

A similar idea, where the person is forced to house said deity that they've made almost completely mortal and unable to properly fend for themselves.
[6] A cult summons a being of chaos, but manages to take away 90% of its power. Now, the being, donning the form of a human after losing its power, wanders the streets in hopes of finding the next opportunity to ruin someone's day.

[7] Everyone has a guardian angel except you. You have a guardian demon. He deals with things in a much more violent fashion, but much more effective. (Would like to play the human.)

[8] A detective and a demon are a crime solving duo. However, the demon is bound to the detective, and only helps because the detective is an idiot.

[9] As you gaze at the beautiful but angry luminescent blue woman staring daggers at you, you wonder if maybe drinking vodka from the genie's lamp might have been a bad dare to accept, college party or not.

[10] If a shapeshifter gets injured, they can't shift until they're re healed because it could lead to a worse injury. This can cause problems when people find them, then try to adopt them after taking them to the vet. This is how I met your father…
Last edited: Apr 28, 2022
OP
OP