((Disclaimer I do not own Alita battle angel, md geist, or berserk, this is pure fan fiction merging the 3 together in my own alternate reality, thank you and enjoy, please direct all comments and/or reviews to my pm))

It had been several months since Hugo had died, Ido had tried and failed to comfort Alita daily. Every day she trained and sharpened her panzer kunst as she remembered more and more. Shed worked hard and fought even harder to make it to the champions league were she was going to compete for final champion. All so she could go to Zalem and end Nova once and for all so he couldn't hurt anyone else anymore.

What she wasn't expecting was for the champions league to be so hard or so intense. Her first game had ended with her and joshigan the last 2 standing. Shed failed to catch him and after a grueling hard game hed scored the victory. That had been over a month ago and after 5 games she and joshigan were always the last 2 left but she could never catch him.

"Alita, you've been moping around in here for 2 days" Ido said snapping her out of her daze. "Hu? Oh... I'm sorry Ido... I'm just not feeling like myself lately." She said looking back out her bedroom window just in time to see a tall man clad in a black cloak with a massive sword on his back. He eyes locked onto his face, he wore a scanning visor, his handsome features though could still be seen and his short spiky black hair just suited him. But just like that he vanished down an alley as the sun glinted off his sword that turned out to be as long as he was tall.

"I know Alita, tell you what, let's go see the motorball tryouts for 3rd league tonight, you can scope out the upcoming competition yeah?" He asked sitting beside her. "Sure... I guess it couldn't hurt to see who the new rookies are this month" she said with a week smile. "That's my girl, come on, lunch is ready" he said leading the way downstairs to the kitchen area where nurse gerard was reading over patient reports.

Later that night Alita and Ido were sitting in her personal box seat next to the other champions box seats on the 3rd level. The announcer droned on as the new tryouts rolled in and were introduced along with the factory team. The last entry caught not only her attention but everyone's all at once "ANNNND NOW THE LAST ENTRY, ALL THE WAY FROM THE WASTELAND, HES THE FIRST AND ONLY ALL HUMAN ENTRY IN THE HISTORY OF THE SPORT, GIVE IT UP FOR THE DAAARK KNIGHT" he exclaimed over the loudspeaker. The man that rolled in caught her total attention without blinking, it was the man shed seen earlier that day wearing a strange suit of armor and carrying his helmet in his hand.

Down on the track Guts rolled to the line making last minute checks on his armor. (See reference A- 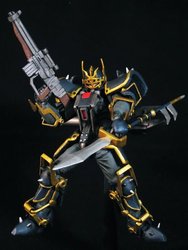 Minus gun and glave, and add inline moter skates.) The strength spinners at his elbows and knees whirled one last time to warm up and the wrist launchers on each underside wrist primed. Flinging his helmet on he locked it on and clasped his face mask on before taking and stance at the line.

The other players couldn't help but look at him as they heard the strength spinners firing up like a pair of saw blades. As the counter hit one the face guard dropped over his mask with a cling, then kicking off with full strength he shot like a bullet at zero. 3 hard leaps put him 30 feet ahead of the others leading into a full tilt high speed zoom. Leaning into the first turn he didn't bother to look back as he scooped up the motorball and held it up for all to see with a roar.

Alita was beyond impressed as she watched him and couldn't take her eyes off him till a fast player caught up trying to get him. Without flinching or even looking guts spun at the last minute, his wheels changing direction on the fly as he turned to face the coming attack and slammed the ball square onto his head planting him face first into the track without loosing any speed. And just like that he snapped back around and was off like a bullet making the crowd roar with delight.

Alita could only smile with wonder as she watched the stranger move through the track like hed been born on it. One by one devastating the competition with his strength boosting armor and built in punch blades. The last 2 left though were proving very hard to shake and had been trying to run him off the track twice already. Cocking his right arm Guts knew he had to do something or he was toast, he figured it was now or never to play his trump card.

Changing direction he went up the curve seemingly about to go off track till he shot his right arm across his chest towards a point on the opposite wall. "GRIND CUTTER, I DONT BELIEVE IT DARK KNIGHTS GOT A GRIND CUTTER" the announcer shouted as it embedded into a wall and allowed him to slingshot back on track ahead of his pursuers. Snatching it free he spun around to go backwards and while facing them shot it out again all the way to grip a point without blades and with a flick used it like a whip to shred the last 2 players.

Popping back around Guts had just enough time to right himself as he came up on the goal in time to plant the ball with a hard thud. "I DONT BELIEVE IT, DARK KNIGHT WINS, DARK KNIGHT WINS DARK KNIGHT WINS!!!" he shouted over and over. As he made his victory lap a screen popped Alitas face up, the camera crews just realized she was there and it was all it took for Guts, seeing her face he then looked all around the stadium till he saw her casing her to look at him as he stopped in the middle of the track.