So, started a roleplaying thread with someone that I am really enjoying. Really haven't even gotten much into the creation stage and I already have an idea for a city to stage it in (and a world for that matter). That being said, I want to populate this world with people that seem to belong there. From the upper crust to the worst grounders and everything in between. Ideas on technology, city setup, and the like are welcome as well. As an aside, I want to say that if you put something cool here it may not make it into my version of the world, but it's still cool.

Onto the basics, remember this is a rough idea at the moment:

It’s a city that has literally grown up over time, becoming a tiered amalgam of towers at the middle of it with things becoming smaller until it hits the outskirts of the city, where everything is at ground level. The more money you have the higher, and closer to the center of the city you live.

The economy has broken to the point that less than 1% of the population controls 99% of the money. Those that live on the ground hold menial jobs, such as fixing the city, dealing with sewage and trash, those near the outside being pushed into forced animal and plant farms. There’s no real way to rise if you’re a ground dweller, as education is minimal past secondary school, those that end up chosen for schooling beyond that are sent back as a neat para-military force to keep the rest of the grounders in line.

The government has claimed that slavery is legal, simply to handle issues with overpopulation and keeping the grounders in line. People can be pushed into slavery in several ways, by force through the penal system, at the request of themselves, or at the behest of their guardian. Slaves are treated as objects, and killing them for sport isn’t uncommon, let alone the other things people get up to with them. Many are chipped with location and explosive devices in case they decide to slip away somehow.

Technology has pushed forward to the point of cybernetic enhancements being commonly available to those with money. As are automated flying vehicles for transport, tiny powerful computer systems, “real” AR and touchable VR platforms. Cyborgs and androids are possible as well, but even full androids are considered more valuable than grounders.

Sprawl is one of many mega cities that inhabit the world now. They are all bordered by dead zones from the last true world war, and people who enter them tend to never come back.

1.) The caste system is harsh in this world. This allows for the use of people as slaves, the upper crust barely seeing the grounders as human. This has allowed the government, which is controlled by the upper crust, to easily start taking on harsher and harsher stances regarding crime and the poverty-stricken.

2.) I haven't decided if there are sub-humans, meta-humans or magic within the city yet. That's all still up in the air, although good ideas regarding any of these would be appreciated. Androids and cyborgs are a thing, though, and AI is prevalent.

3.) I'm looking for people to come up with a character concept for NPCs within Sprawl. Upper Crust, Grounders, whatever.

Looking forward to hearing from you all. And if I don't hear from anyone, well... I'll simply be updating these threads as I make a decision on my own.

James McCoullagh - CEO of the Brandis Energy Firm, a company that has a chokehold on the current energy resources of the Sprawl. Whether it be your typical electrical, oil, plasma, solar or even human-made power: Brandis has control of it. James is in his mid-forties, tall, beastly in stature and ruthless in his business practices.

SecForce - Grounders that have been selected to 'police' other Grounders. They are selected for their intelligence, sadism and willingness to take orders. Education is provided to SecForce hopefuls and they are encouraged to be brutal and efficient when meting out punishments. Typically SecForce is split into twenty to thirty member companies that are led by a lone Justicar and 'keep the peace' in Grounder settlements. Justicars - Grounders that have been selected for education into the SecForce and have shown even more promise when it comes to keep other Grounders in their place. These high-ranking SecForce members are the judge, jury and executioners that lord over day-to-day life for the Grounders. They are chosen from the regular SecForce peons typically on a suggestion from another Justicar. 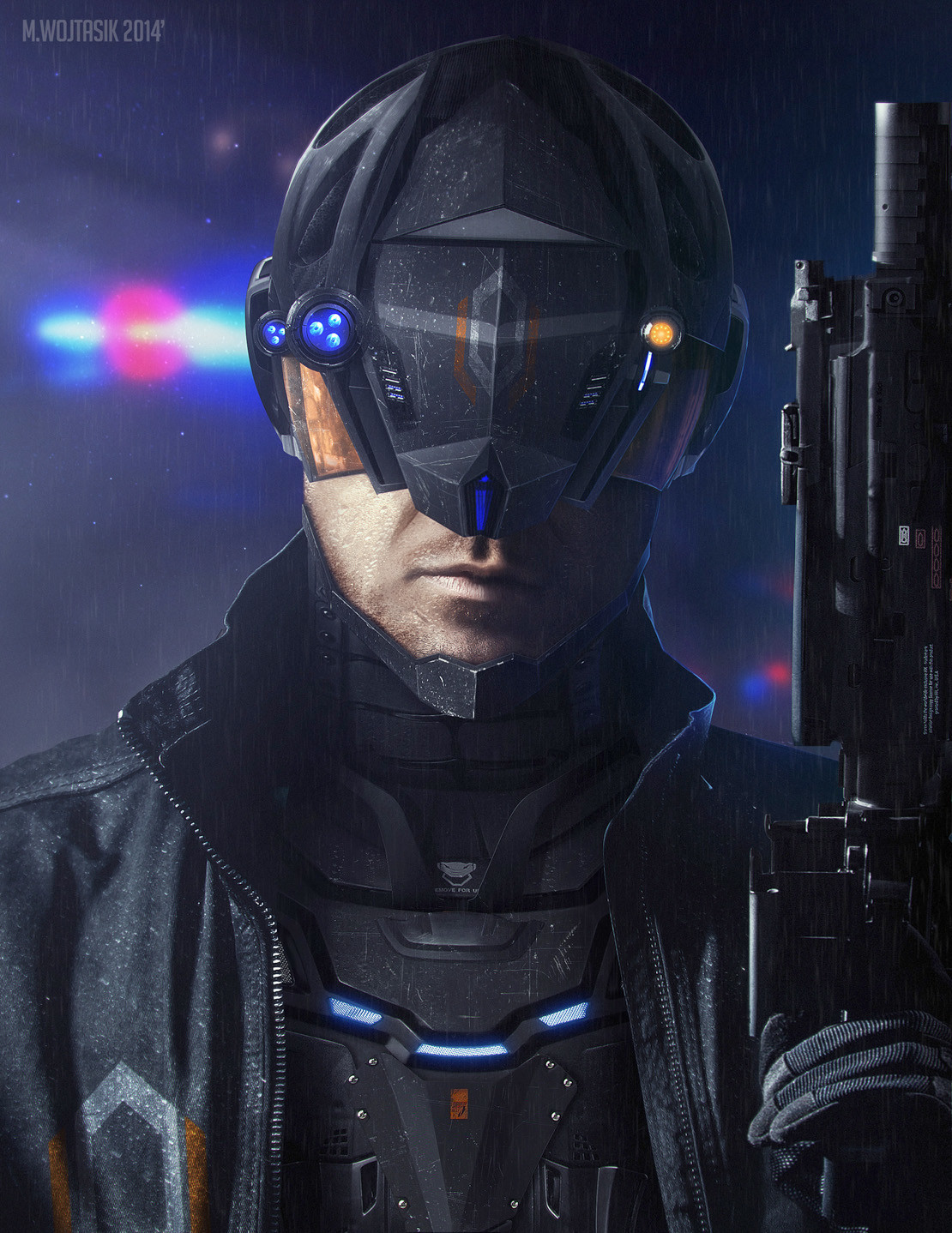 I like this a let and would love to speak more but for now my only contribution is: nanobot species. Rival elites might be patrons of mad scientists, sometimes sheltered elites themselves who used sophisticated technology to sophisticate their tech even further, each finding nigh divine methods of improving their power. Some have discovered incredible materials that can withstand any weaponized temperature or submerge in volcanoes, while others are less resilient but carry data and function as invisible telekinetic arms.

Maybe for the more poorer areas of the city; they're left to rot in abandoned and run down buildings, maybe some areas don't have the best electricity or any other natural resources to say...People who also live in these areas probably don't have the best clothing selection so they might just be draped in drag.

Probably they only have 'hand me downs' from the upper richer city areas, or anything they can find in the dumps.

I believe it would be interesting for the city to have Sub and meta humans! Course only in the richer areas or the city. Maybe there could be a few characters that were Sub or meta humans who were thrown into the slums, no longer of use to the higher ups...?

Sokeri said:
Maybe for the more poorer areas of the city; they're left to rot in abandoned and run down buildings, maybe some areas don't have the best electricity or any other natural resources to say...People who also live in these areas probably don't have the best clothing selection so they might just be draped in drag.

Probably they only have 'hand me downs' from the upper richer city areas, or anything they can find in the dumps.

I believe it would be interesting for the city to have Sub and meta humans! Course only in the richer areas or the city. Maybe there could be a few characters that were Sub or meta humans who were thrown into the slums, no longer of use to the higher ups...?
Click to expand...

That happens in this world, disaffected elites. Surely someone could get a few upgrades then lose their job and be blacklisted from any elite circles.

among the various "grounder" areas there are 4 types of "zones"

The "green zones" where the upper class recruit their servants, personal drivers (while having self driving cars is normal having an actual driver is more of s fashion statement), prostitutes and others are recruited. This is where that last 1% of wealth is concentrated.

next are the Yellow zones, these border the green zones. Minimal infrastructural upkeep is maintained here, and it is also where most security forces are concentrated. Unemployment is almost total and these areas run on their own black markets and barter systems to make up their own economies, the rooftops are dotted with gardens and water collection stations, as such the Yellow zones have formed their own cultural identity separate from the green and white zones (white zone referring to the area the wealthiest live in) life is hard in the Yellow zones, but it is possible. this is also where over 90% of grounders turned into slaves are "aquired"

finally. the black zones. The areas the upper crust truly fear. Ruled by gangs who alternate between fighting eachother and fighting the establishment. No slaves are collected here, security staff and those working for the government are killed on sight. Black zones are bombed out hellscapes, with several communities surviving underground either in old bunkers, communities build in tunnels built between basements and old railway stations, and in the sewers. Government drones patrol the surface, killing anything they see, but despite how calm the surface is, every security patrol sent in there has come under sniper fire, IED attacks and others.

The residents of the black and yellow zones are almost one in the same, food, drugs and weapons flow between the zones as well as fighters. Attacks from those armed and trained in the black zones are common, the more the establishment cracks down, the more severe and more frequent the attacks are becoming. Security forces are increasingly paranoid and demoralized, catching people to be enslaved used to be as simple as grabbing someone off the streets, now there is a good chance that teen throwing rocks at a checkpoint, committing all sorts of enslavable offenses likely has snipers ready to kill whoever comes out to drag him in or worse, there are armed fighters ready to storm the place after the kid sets off a bomb he has strapped to him the second he's through the door.

The increasing demands of the rich combined with the increasing resistance from the grounders is a powder keg waiting to explode, and while most of the rich don't know or care, those in charge of keeping their order know, eventually something is gonna happen. An event, a "final straw", when they'll be facing a civil war and they'll be fighting armed, trained, fanatical grounders, not a crowd of unarmed protesters like before. And they know that even if they win (which is unlikely) all they'll be ruling over will be ashes.

This is the first time I've been asked to just worldbuild. I hope I see more threads like this.
OP

I absolutely love these ideas. The colored zones, albeit from a non-institutionally correct sort of way, is amazing. The idea of there being a chance of things falling into disrepair to a point where it's living off it's own 'sub-society' is great.

Nano-bites are an excellent idea, as is taking the world and putting the sub and meta-humans in the better parts of society (barring a fall from grace).
S

You need another social class between the grounders and the 1% city rulers for the sprawl. Your 1 per-centers are not going to be the managing party for the grounders doing menial labor. You are going to need an educated class of person to be the managers of the grounders doing menial work or the city infrastructure will collapse. Are they branch families of the 1% or another social tier themselves?
You must log in or register to reply here.
Share:
Twitter Reddit Pinterest Tumblr Email Link
Top Bottom